Urban Air Mobility: What Is It?

Humans tend to think in two dimensions. We are comfortable with forward and backward, left and right, but tend not to think of up and down. Our cities are built the same way, with the majority of buildings only having a couple of stories.

Transportation works the same way. Vehicles move primarily over surface roads, with the occasional overpass or tunnel where the landscape demands it. The premise behind urban air mobility (UAM) is to take advantage of the vertical dimension to reduce the congestion faced by many cities.

If you’ve ever seen Star Wars, The Jetsons, or any number of other futuristic films, you’re familiar with the concept of urban air mobility (UAM). Rather than restricting vehicles to the ground, these societies have hovercars or similarly named other vehicles, that travel through vertically stacked skylanes. As a result, transportation is more efficient since the capacity of the road is no longer limited to the number of lanes that can be fit on the ground.

The concept of urban air mobility is quickly moving from science fiction to reality. In the 1970s, cities like Boston had implemented a precursor to UAM with the use of helicopters to move people quickly across the city. However, the program was canceled due to concerns about safety and noise pollution.

With modern technology and the growing congestion of cities, the concept of UAM is getting more traction. In order to be successful, UAM requires vehicles that can perform vertical takeoffs and landings (VTOL) without the need for a runway. Such vehicles are currently in development by more than 100 companies and can be expected to be operational within three to 10 years.

With VTOL vehicles, UAM can take advantage of the airspace between 500 and 5,000 feet above ground level. Very few vehicles use this airspace (with the exception of the areas around airports that need it for takeoffs and landings), making it an untapped resource for urban transportation.

Many organizations have expressed interest in UAM, including MITRE, NASA, the US Department of Transportation, and the FAA. However, one of the true pioneers of the space is Uber.

Uber originally began as a ride-hailing company, providing a viable alternative to the taxi industry. As part of their focus in revolutionizing the transportation industry, they’ve begun looking at UAM as a way to provide rapid, reliable transportation to its users.

Beyond their efforts to develop an operating system for UAM vehicles, Uber has also helped to inspire others to join the UAM industry. The Uber Elevate whitepaper and the Uber Elevate Summit (running annually since 2017) have served as the impetus for many organizations to participate in tackling the challenges of UAM.

Urban air mobility is a challenging problem to solve. The past problems that Boston’s helicopter-based program faced (safety, noise, etc.) haven’t gone away. A large portion of the work being performed currently in the UAM space is the development of vehicles that can achieve the mission of UAM (5- to 50-mile trips at 500-5,000 feet with vertical takeoffs and landings) without being deafening or unsafe.

An important component of this is the development of battery technology. Electric vehicles are quieter than fuel-powered ones, but UAM vehicles need a significant amount of power to carry their loads over the distances required. The batteries used need to have significant storage capacities while remaining compact and lightweight.

However, Uber Elevate and other organizations have made great strides toward managing the technical challenges of UAM. NASA is also working to advance and promote UAM by beginning a series of UAM Grand Challenges in 2020 to help promote development and improve public faith in the technology.

Another important factor of UAM is the legal and regulatory side. The goals of UAM and the technologies involved are brand new, but they have the potential to become mainstream within even a few years. Organizations like the FAA are actively working to develop the regulations and standards necessary to ensure that UAM is a safe option for all involved.

Achieving the level of safety expected of UAM technology will be a significant technical challenge for vehicle developers. Traveling by car can be dangerous (with about 1.25 million deaths per year due to car crashes), but people are often more comfortable with it than air travel, despite the fact that there were a total of 556 deaths in 2018 (a relatively “high” year for airplane deaths).

UAM travel will be held to the same safety standards as commercial aircraft, with the expectation that deaths will be less than 0.6 fatal accidents per million departures. It took commercial air travel almost 80 years to achieve this and the rate keeps dropping, setting a high bar for UAM.

As science fiction like Star Wars and The Jetsons have demonstrated, humans have been considering the potential of flying urban transportation for a very long time. However, it wasn’t until the present day that technology has advanced sufficiently to make this feasible. Pioneers of UAM like Uber Elevate have set the stage for the next revolution in human transportation: urban air mobility. 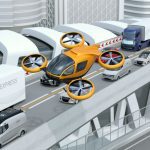